« Back to the Cobalt Boats University Index
You are here:
Print 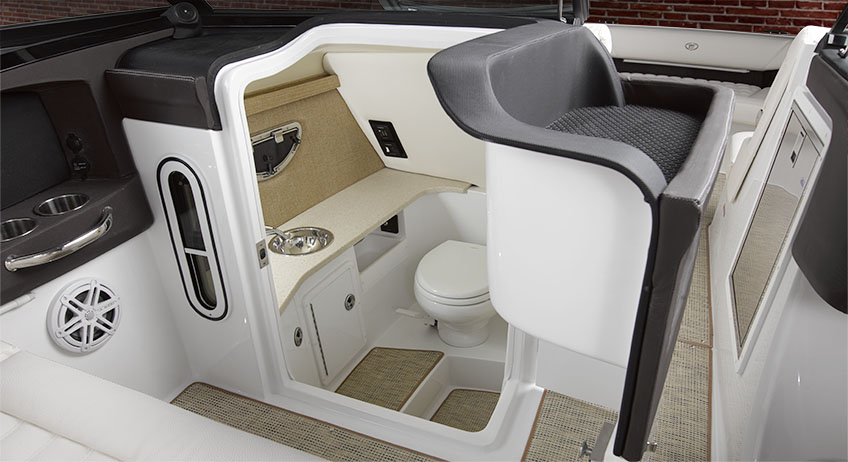 The large step-down head compartment offered in the Cobalt 30SC.

There are three basic types of marine heads offered by Cobalt.  Not all three are offered in all models with a head compartment.

In deciding which head is the best for your needs, you’ll need to determine just how often you think the head is actually going to be used.  Some people will never use it and use the head compartment for storage.  But assuming your usage is just going to be occasional, then the simplest system is the Porta Potti. 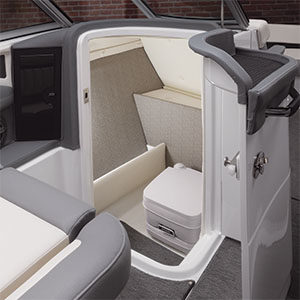 The next type of system uses the same Porta Potti as described above but the holding tank is permanently installed and plumbed with tubing to a fitting on the deck of the boat.  The fitting is marked “Waste”.  When the tank is full, you will need to take the boat to a marina that has “Pump Out” capabilities.  The personnel there will remove the cap, pump out the contents of the holding tank, and reinstall the cap.  (Note:  The cap is stainless and does not float.  And unlike other fittings on the deck of the boat such as the Fuel Fill, there is no chain holding the cap to the boat.)  With a pump out system, there can be no chain to prevent dropping the cap into the water.  And it will not float!  After the pump out, all that remains to be done is to top off the flushing water and add additional chemicals to the holding tank.

The third variation to the Porta Potti system adds a pump overboard feature.  First and foremost, you cannot dump or pump out a toilet system directly into the water ANYWHERE in the continental United States and Canada.  So, unless you plan on taking your Cobalt offshore about 10 miles, you cannot use this system.  If your boat has the pump out system, there is a “Y Valve” installed and you have to manually turn the valve approximately 60 degrees to divert the contents of the holding tank from the deck fitting to an overboard fitting on the side of the hull.  Assuming your boat has this option and you are in the continental U.S. or Canada, this Y Valve must be wired shut.  To use the overboard feature, you first open the Y Valve and then on the dash or in the head compartment is a switch marked Macerator and you turn it on.  It will empty the holding tank.  When empty, turn off the pump, close the valve, install new chemicals into the holding tank, check the fresh water tank on the toilet, and you are back in business. 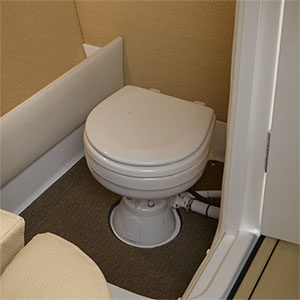 The next system is the Electric flush toilet.  This option includes the fresh water system which is a 10 gal fresh water tank which is filled using a deck mounted fitting marked “Water”.  To flush the toilet, you simply push the button in the head compartment marked “Flush” and hold the button until the contents of the bowl are gone.  The flushing water comes from a thru-hull fitting which has a shut-off valve on it.  It then goes through a strainer and to the toilet.  It is suggested that you occasionally put chemicals into this system to control odor and help break up solids.  The holding tank, unlike the Porta Potti, is a separate unit installed under the floor of the boat and has much more capacity than does the Porta Potti holding tank.  This system also has a deck fitting installed for pumping out the system at a marina.  Additionally, this system can be ordered with the overboard feature previously described and the same rules apply.  This is the most popular system because it is the least labor intensive and the holding tank is significantly larger than the Porta Potti’s tank. 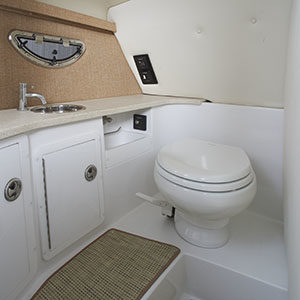 There is one more system available on the larger Cobalt’s and it is called VacuFlush.  This system requires the boat have a fresh water system for the flushing water.  There is a switch on the dash marked “Water System” and it must be turned on for the system to work.  (This same fresh water system will also pressurize any other water fittings in the boat such as sinks or shower.)   In the head compartment there is a switch panel for the VacuFlush system and it must be turned on.  When first turned on, the indicator light on the panel will be red indicating the system is building up vacuum which will take about 20 seconds.   When the system is ready to be used, the light will turn green.  To flush the system, push down on the foot operated handle on the side of the toilet.  There will be a loud noise and the system will vacuum the contents of the bowl to the system’s holding tank.  To add more water to the bowl, lift the foot handle and water from the boat’s fresh water system will go into the bowl.  This system requires pumping out like the other systems and this is done at the marina.   Like the other systems, there is an optional overboard discharge system and the same rules for usage apply.  However it operates differently.  in the head compartment, there is a key operated switch that will activate the overboard pump and empty the holding tank.  By law, this key is to be controlled by the Captain of the boat only.  It is not illegal in the U.S. to have the overboard system as long as the key to operate it is in the control of the Captain of the boat.  Please check with your Cobalt dealer for further information regarding pumping overboard.

Any cookies that may not be particularly necessary for the website to function and is used specifically to collect user personal data via analytics, ads, other embedded contents are termed as non-necessary cookies. It is mandatory to procure user consent prior to running these cookies on your website.