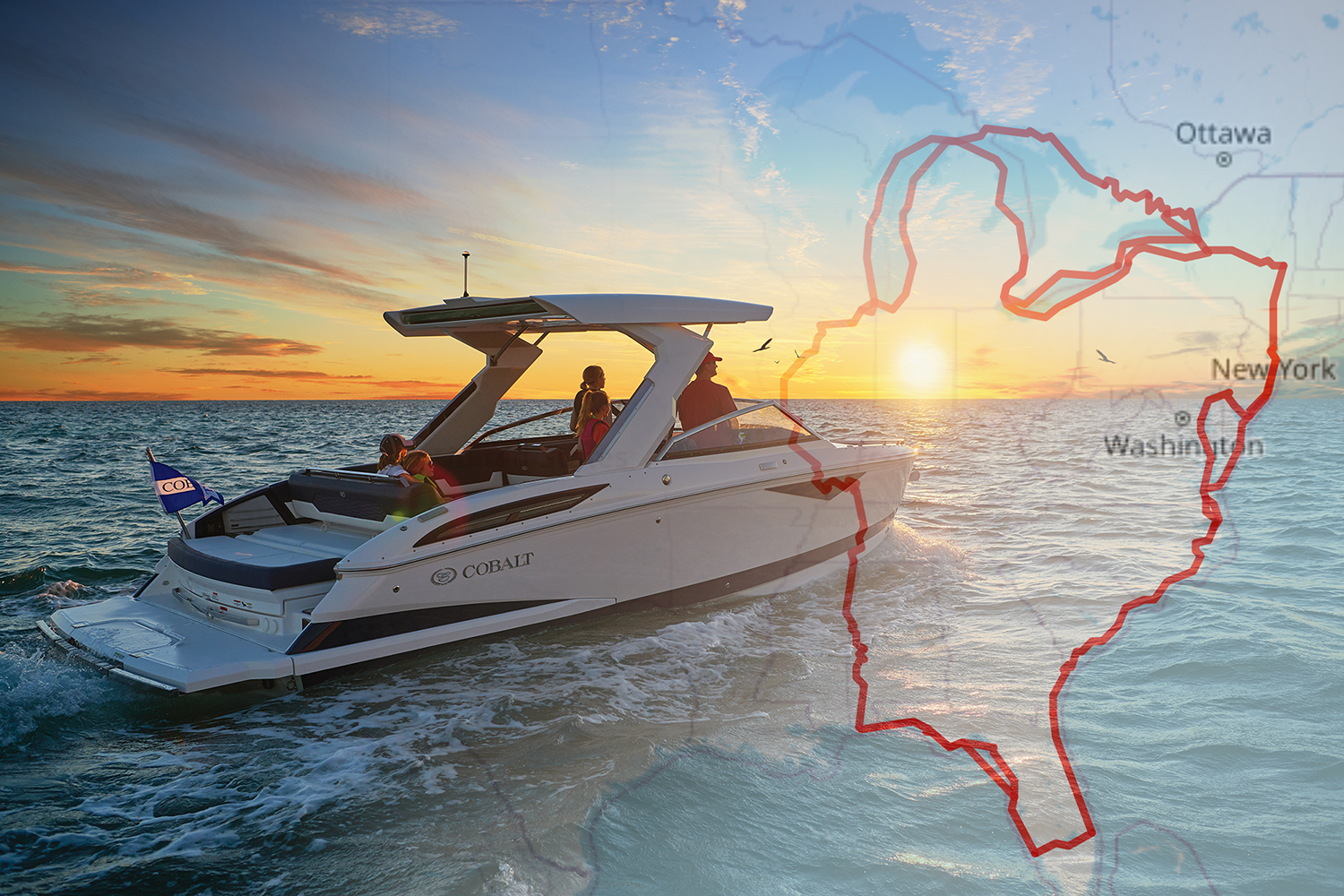 What boating excursion covers 6,000 miles on the water and circumnavigates the entire eastern United States?

It’s the Great Loop of America, a continuous waterway circuit that enables recreational boaters to traverse inland rivers, the Gulf of Mexico, Intercoastal waterways, the Atlantic coast, the Erie Canal, the St. Lawrence Seaway and even the Great Lakes to enjoy the adventure of a lifetime. Not for the faint of heart, the Great Loop is nonetheless one of the purest boating experiences available, offering a way to truly appreciate America’s historical waterways and understand how important boating was to the country’s westward expansion.

Meeting the Challenge in a Cobalt

Requiring a boat with less than a five-foot draft, the Great Loop is challenging in terms of navigation as well, with recommended aids including NOAA nautical charts and a NOAA radio. It also requires a fair amount of time to complete, depending on your boat’s speed and its ability to handle ocean waves and currents. That said Cobalt owner Doug Perks and his wife Mary completed the voyage in 2020 to set an example for other aspiring sailors, becoming ‘Loopers’ (the official term for those who manage the feat) and earning the coveted Great Loop burgee to fly on their A40.

A Trip with No Limits

The Loop itself has many variations, it turns out, as there is no single route or itinerary that defines it. Some boaters cut through Florida via the Intercoastal, while others go around the whole state via Key West. To avoid hurricanes in the summer and ice in the winter, boaters can time their passages through the Gulf of Mexico or across the Great Lakes and Canadian waterways to coincide with better weather. The entire circuit can take as little as two months or as long as a year, and the trip can also be done in segments. Boaters can begin anywhere, with the goal being to eventually return to the starting point to ‘cross their wake’ and finish the Loop.

A Choice of Scenery

A typical route starts at Chicago, setting out along the Des Plaines River and connecting to the Illinois and Mississippi. Proceeding south along the Mississippi, boats can go all the way to New Orleans or detour to the Tennessee-Tombigbee Waterway, where the Ohio River eventually leads via a series of locks to Mobile, AL, on the Gulf of Mexico. The Eastern Seaboard offers similar choices, including options to visit Chesapeake Bay, Delaware Bay, Cape May, NJ and New York City via the Atlantic Ocean.

The Hudson River then carries Loopers to Canada’s Champlain Canal, the famed Erie Canal and all the way to Lake Huron, Lake Ontario or Lake Michigan to complete the circuit back to Chicago.

The Great Loop is a prestigious accomplishment, supported by its own club, the Great Loop Cruisers Association. The Association’s goal is to help boaters who are ‘either dreaming about, planning for, currently cruising or have completed the Great Loop.’ It offers a wealth of information, from FAQs to harbor guides, webinars and even a Cost of Looping Calculator, but perhaps its most important purpose is to build camaraderie and fellowship among Loopers. To learn more, here’s a link: https://www.greatloop.org/page/JoinUs.

If you’re interested in taking your own Great Loop adventure, we’re interested, too! Contact us and we’ll be glad to cover your progress and pass along tips from your fellow Cobalt owners!